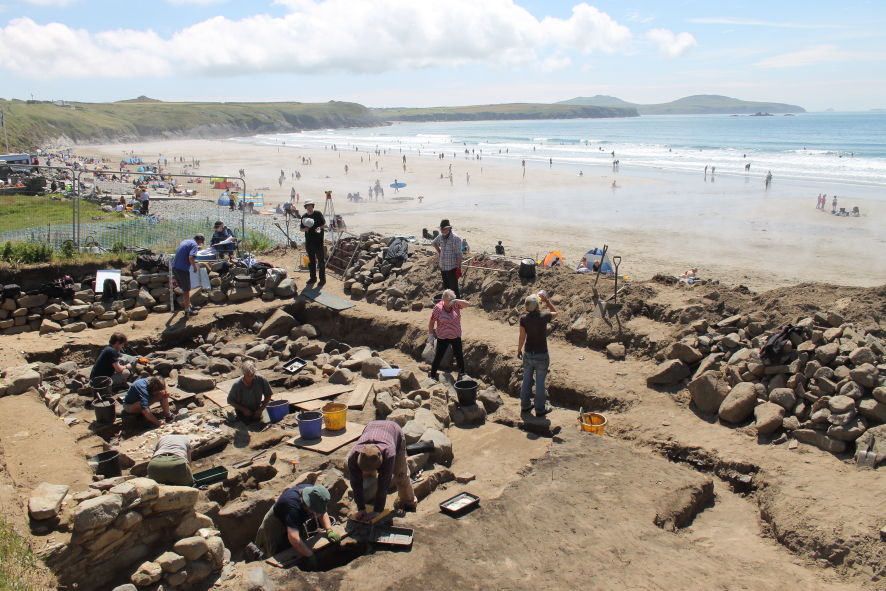 Coastal erosion has been affecting St Patrick’s early medieval cemetery and medieval chapel at Whitesands, St Davids, Pembrokeshire since at least the mid-twentieth century. Storms in January and February 2014 exposed several burials, following which Dyfed Archaeological Trust in partnership with the University of Sheffield carried out five seasons of excavation: 2014–16, 2019 and 2021, funded by Cadw, the Nineveh Trust, the EU funded Ancient Connections project and the Pembrokeshire Coast National Park Authority.

The earliest elements of the site consisted of an oval stone-built enclosure, 5.5m × 4.5m, with a centrally placed rectangular structure, 1.4m × 1.0m, dating to the mid eighth century. Several of the stones of the structure were carved — a ring-cross with interlace design, a human figure dressed in a tunic with stick arms raised, and an inscription reading ‘donoec’ (an Irish compound name meaning something like ‘dark youth’ or ‘noble warrior’). Evidence of occupation, mammal, bird and fish bones, cereal grains and other carbonised seeds, and craft production accompanied this early element, including the manufacture of copper alloy artefacts and amber working. Wind-blown sand rapidly covered these early elements.

In the mid- late eighth/ninth century a substantial stone-built cemetery enclosure wall was built over oval enclosure and rectangular structure, and the first burials appeared.
The first burials were of young children. Sand continued to accumulate, and as it did so
more burials were put in the ground. Over 250 burials were excavated, stacked up to eight deep in the sand, between the mid- late eighth/ninth century and c. 1100. After the first phase of child burial, both children and adults were buried. The earliest burials were simple dug graves; later in the sequence cist graves appeared.

In the eleventh/twelfth century a layer of rubble was laid down covering the early medieval cemetery and a stone-built chapel constructed. Burials accompanying the chapel consisted of cist graves capped with quartz pebbles or in some examples with limpet shells. All were of children. The chapel was abandoned during the sixteenth century.