There’s more to historic research than that found on parchment and vellum or between the pages of books. Much still lives within a place’s culture, landscape and memory. So very importantly, during this project, we’re asking our communities to share with us those half remembered tales told to them as children, to tell us their colloquial names for places and to explore with us fragments of local folk knowledge that’s everyday stuff to them, but may well lead us together, to a little treasure trove of knowledge and understanding about their place. We’ll also be sharing some of the gems we unearth through our research in archives and with community members. 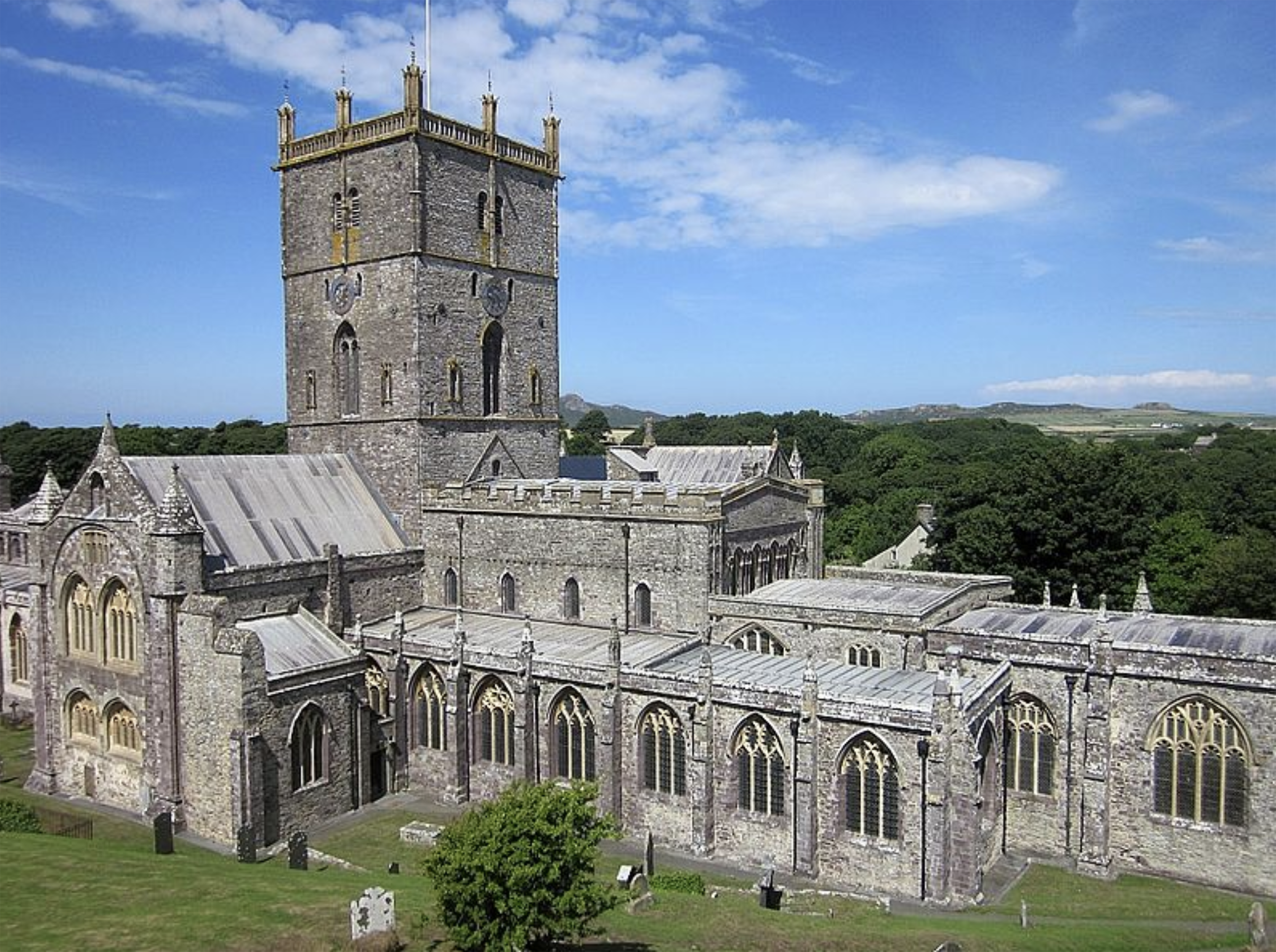 So let’s begin with a saint’s tale. St David’s Cathedral and St Edan’s Cathedral Church in Ferns, Ireland are both within the project areas, so the stories of saints and their comings and goings across the Irish sea, their interactions and miracles loom large in our research. Trying to tease apart what might be counted as history from the Age of Saints as opposed to mythology and folklore is virtually impossible. Our ancestor’s did not think of history or recording it as we do today, and much of saintly happenings were spread orally, growing in colour and wonder as the tales passed from tongue to ear.

Saint David and the Chieftain Boia

Here’s just one of his collected tales that relates to Wales’ patron Saint, David – or Dewi to give him his Welsh name.

At the end of his missionary travels in about the year 560, according to the tale, Dewi was guided by an Angel to return to found a monastery in the land of his birth. And so he returned to Glyn Rhosyn with some companions, including Teilo, Ismael and Aidan (also known in Ireland as St Edan, who later founded the Cathedral in Ferns).

Once there, the companions lit a fire to warm themselves and prepare some food, but the curling smoke drew the attention of a local chieftain, Boia who ruled this corner of the land from his hill fort of Clegyr Boia. He was furious that intruders were planning to settle a short way from his fort – and without doing due homage to him, and paying the respect he felt he deserved. And so, with the encouragement of his wife, he took warriors down to Glyn Rhosyn to drive Dewi and his followers away. But as Boia and his men attacked, they were afflicted with a terrible fever and dropped to the ground and were forced to crawl away in retreat. When they returned to the fort, it was to find that their sheep and cattle were dead, and that Baia’s wife was in a frenzy of fury.

However, aware that he had encountered in these men powers beyond his understanding, and in a little awe and fear, Boia granted Dewi the land at Glyn Rhosyn for his community. Sure enough, as soon as he did so, the warriors were cured of their affliction and the livestock restored to life.

Boia’s wife however, was not so easily won over. She sent her maidens to bathe naked in the River Alun, to tempt Dewi’s followers away from their vows, but they held fast, and through fasting and prayer Dewi helped his companions withstand these great temptations. Finally, Boia’s wife led her step-daughter Dunawd down to the river Alun and sacrificed her to the old gods in an attempt to drive the Christian men away. Her failure drove her to utter madness and she fled, never to be seen again.

Boia was devastated by his loss and again tried to attack David, but an Irish chieftain by the name of Lisci had just landed nearby, and attacked Boia’s poorly defended camp and killed him. Lisci’s name remains in the landscape to this day in the name Porthlysgi.

To complete the tale with one final miracle, fire poured down from heaven during a great thunderstorm and the whole of Boia’s hill fort settlement was destroyed by the inferno. And all this must be utterly true because over 1400 years later, when archaeologists excavated Clegyr Boia, what you think they discovered? Beneath the turf lay the charred remains of huts and storehouses.

You can easily visit Clegyr Boia as it’s accessible from a little lane running out of the city of St David’s in Pembrokeshire (see the OS map above). There are also a number of holy wells nearby to explore – enjoy, and please unearth some more myths and legends as you walk.